After a stagnant first quarter performance, most metro markets saw modest rent growth and stabilized vacancy rates in the second quarter. The national rent growth rate has also stabilized, measuring 3.6 percent annually, according to RealPage. The Western markets of Sacramento, Seattle and Riverside-San Bernardino led the way. Unlike previous quarters, the San Francisco Bay Area has finally begun to show signs of recovery, with the San Francisco, San Jose and Oakland submarkets all posting increases above 1.0 percent. Houston, however, continues to experience rent decreases, although the rate of decline has begun to abate as the energy slump slowly dissipates. 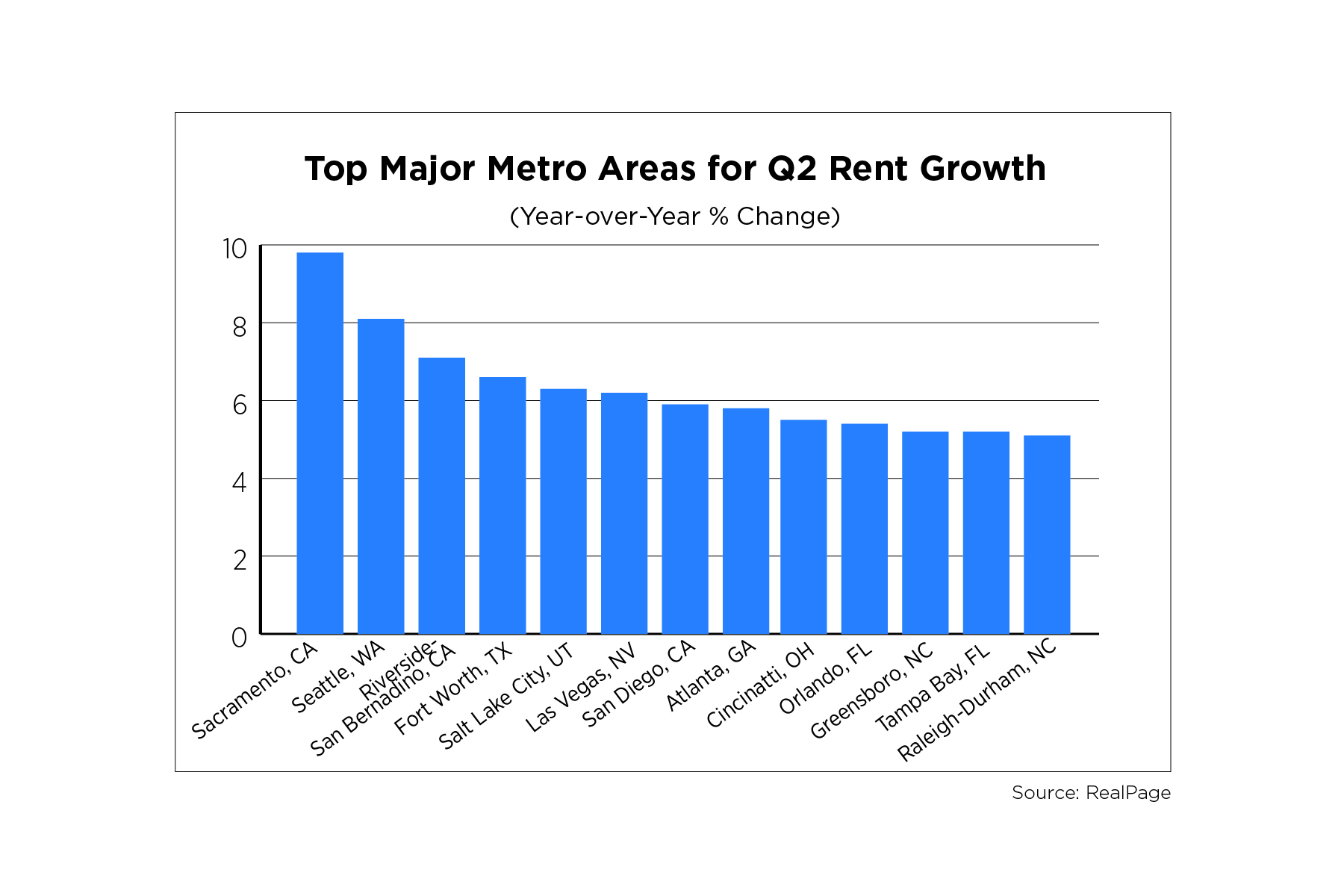 While an onslaught of new construction dampened occupancy rates in fourth quarter 2016 and early 2017, conditions improved during the second quarter. Data from RealPage indicated national demand for more than 175,000 units, far exceeding the 86,431 units completed. Nevertheless, the market is still working through the glut of apartments from the two previous quarters, with occupancy now sitting at a still-healthy 95 percent. This is down slightly from the 95.3 percent a year prior.

According to the Census Bureau, there were a total of 284,000 multifamily unit construction starts nationally in May, a substantial 25.7 percent fall from the previous year. On the other hand, 52,000 more units were delivered compared to the same time last year, bringing the total number of deliveries to 335,000 units. 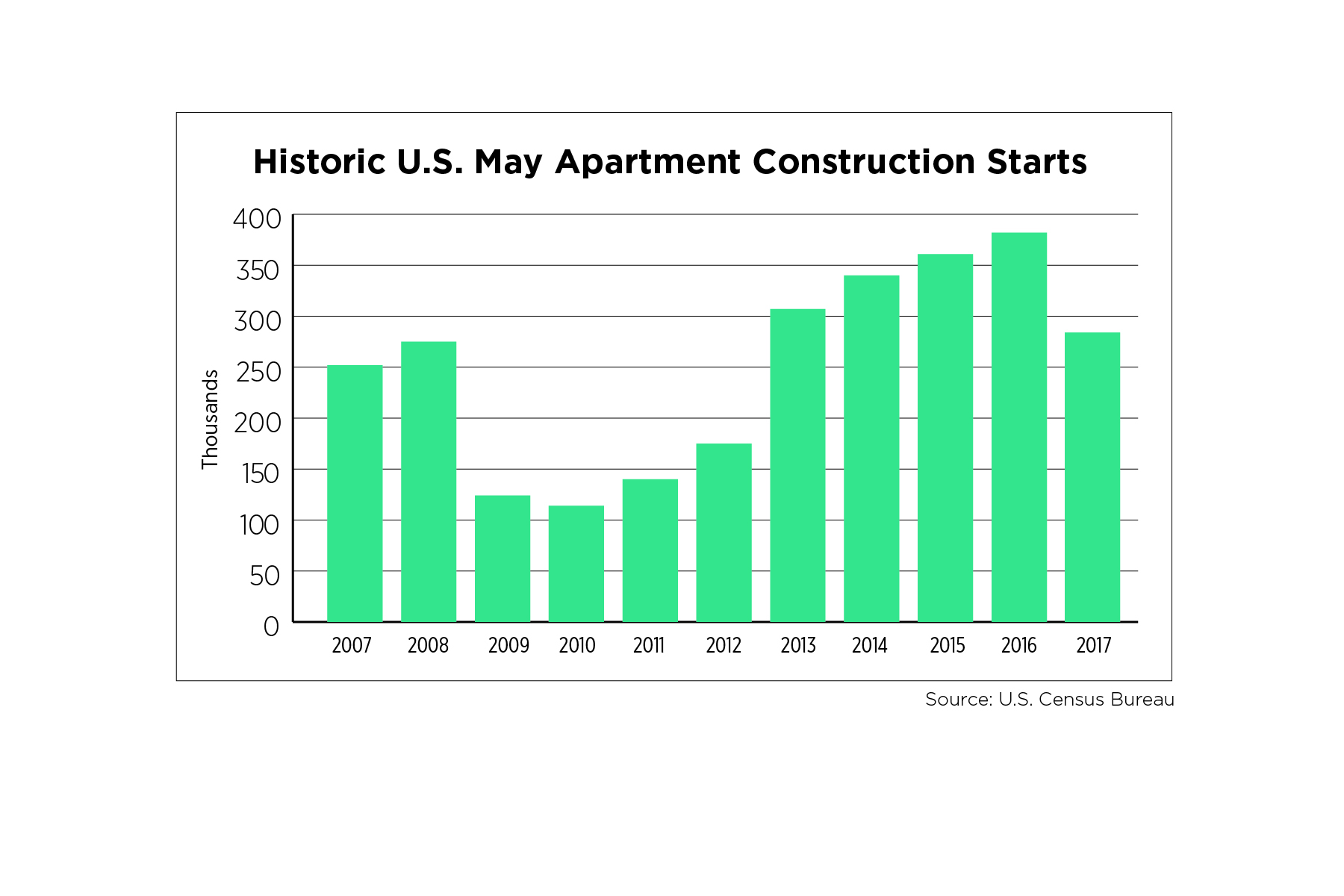 If we analyze the construction figures at the regional level, we see that multifamily starts declined in the Midwest (-67.6 percent) and South (-33.9 percent), while increasing in the West by 8.3 percent and Northeast by 29.7 percent. Deliveries fell in the Midwest (-50.8 percent), while jumping dramatically in the Northeast (158.2 percent) and increasing in the South by 21.3 percent and West by 19.1 percent. Going forward for the rest of 2017, it will be interesting to see how the variation in deliveries by region will shape rents and occupancy, especially in the Northeast.

According to Real Capital Analytics, closed transactions for apartment property sales totaled $145 billion for the 12 months leading up to May, down 8.1 percent year-over-year. More than a million units changed hands during the same period, a decline of 9.2 percent. These decreases were expected, because of a combination of rising interest rates, some oversaturated markets, and continued uncertainties surrounding tax reform since the end of 2016. 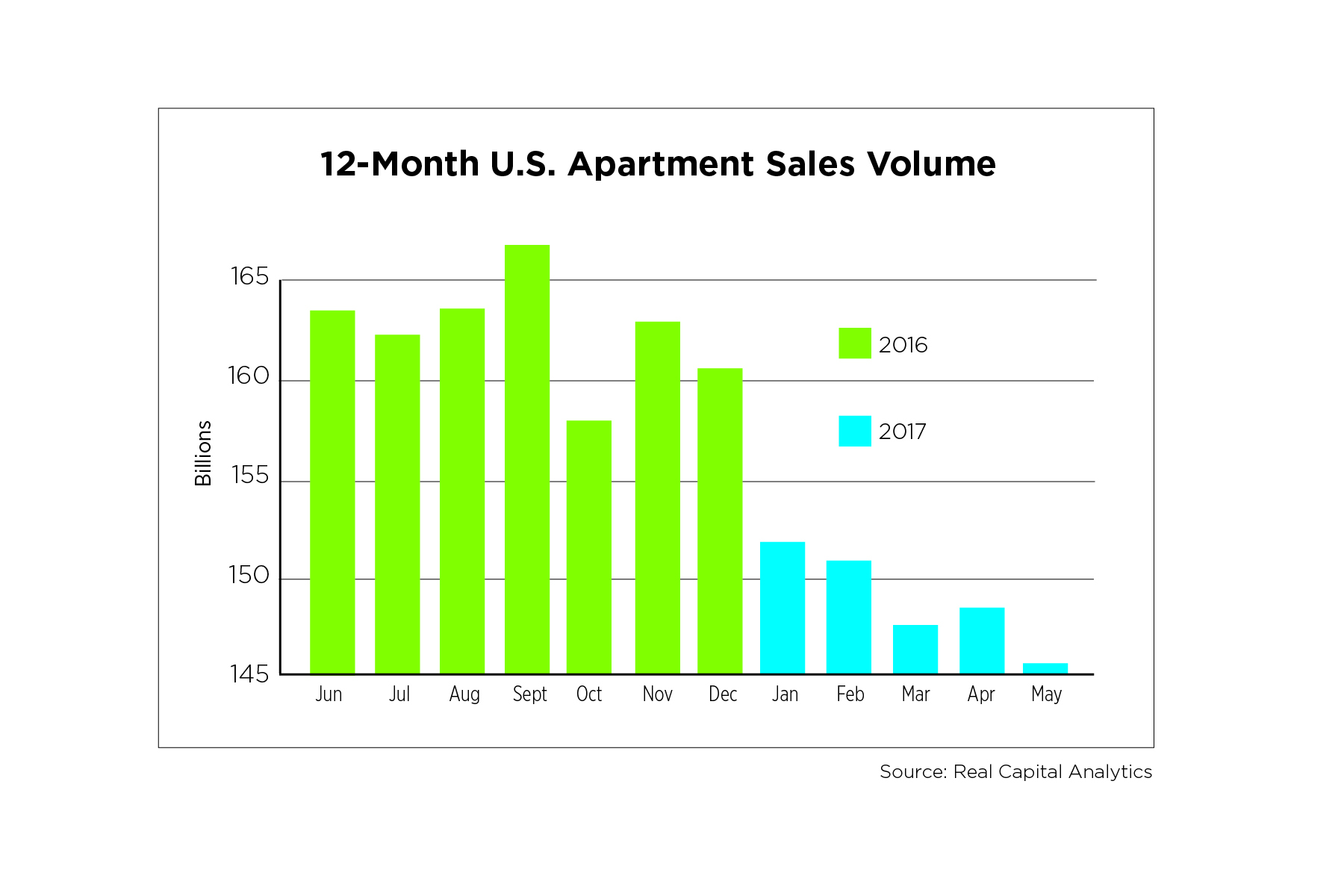 Foreign investment continued its descent from 2015, with volume down 55.3 percent from the year prior. Canada still constituted the largest share of foreign capital in the U.S. apartment market, although investors from Singapore were also fairly active. Investors seemed to favor a diverse selection of markets, including Sunbelt markets such as Austin, Phoenix and Miami, as well as larger urban locales including Chicago and New York City.

The national economy added an impressive average of 193,000 jobs per month during the second quarter, an 18 percent increase from the same period during 2016. Unemployment remained historically low, standing at 4.4 percent as of June, the lowest 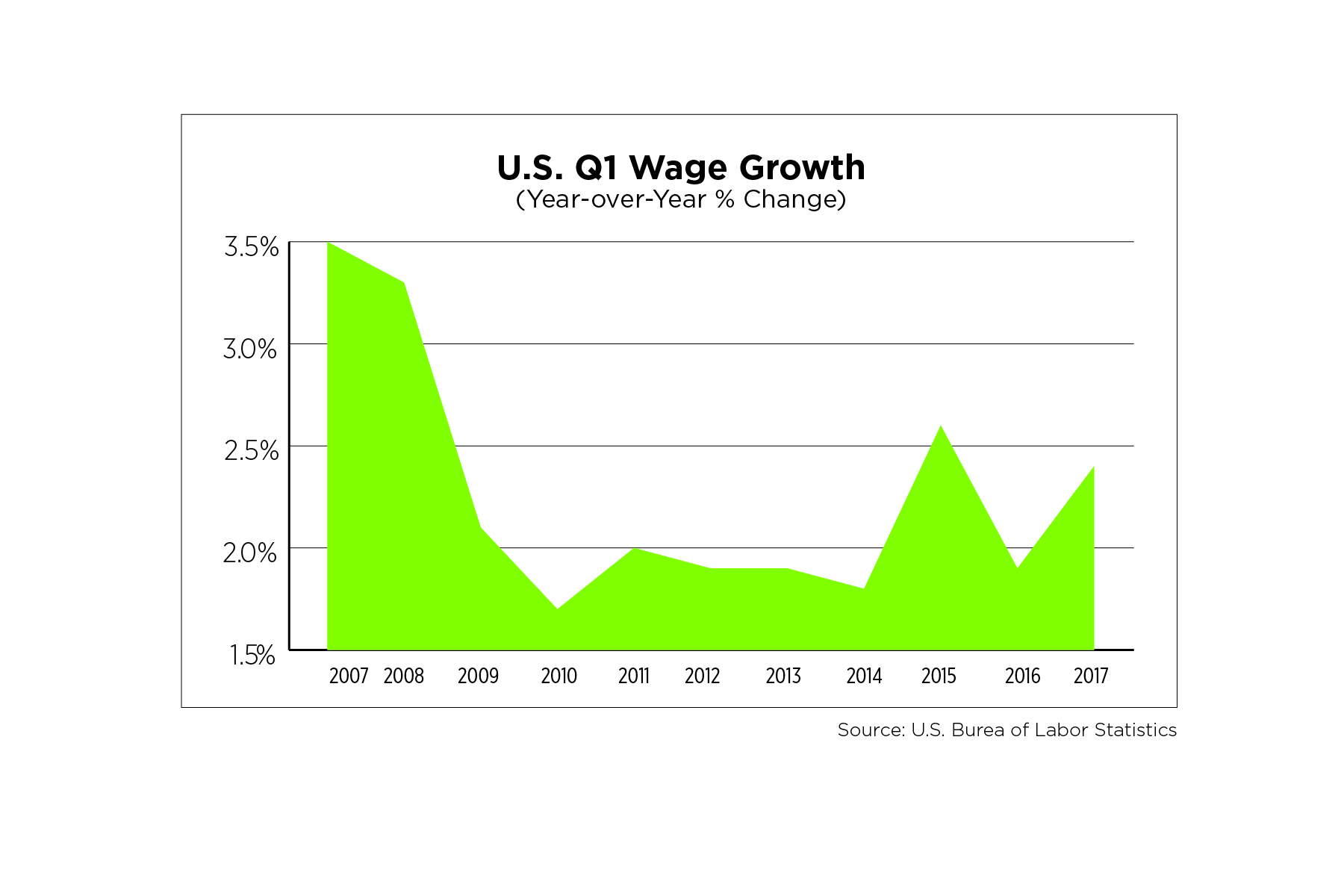 recorded rate in 10 years. As the current economic expansion marches on as the third-longest in history, employers in some industries and markets are having difficulty filling vacant positions with qualified employees, spurring continued wage growth.

Looking ahead into the remainder of 2017, a tight for-sale housing inventory coupled with rising mortgage interest rates may sideline more potential homebuyers, thereby buoying apartment demand. This could help support healthy rental demand in the traditionally more-expensive Northeast and West Coast markets. The slowing in multifamily starts at the national level is good news for markets overloaded with luxury product, but puts further pressure on the highly-sought-after Class B/C sector.

ABQ Residents: Vote "NO" on Proposed OrdinanceAugust 17, 2017 Apartment Upgrades that Move the NeedleJuly 25, 2017